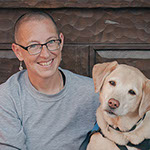 Michel grew up in Montana, and spent their twenties and thirties primarily in Seattle and San Francisco. They have  an M.A. in International Studies from the University of Washington, with a focus on Japan. After graduate school, they received a fellowship from the Japanese Ministry of Education, allowing them to live and study in Osaka and Kyoto for three years.

They are assisted in all of her creative endeavors by their service dog, Rocky.

Michel's blog is at www.michellewing.com

Body on the Wall