Half Japanese, Kathleen Hellen was born in Tokyo in 1951, six years to the day after Japan's surrender to the Allies. Her father served as secretary to the U.S. Defense Counsel for Prime Minister Hideki Tōjō during the Tokyo War Crimes Trials. Her mother was born into the military nobility of the samurai and the daughter of a Shinto priest.

Hellen is the author of the award-winning Umberto's Night and two chapbooks, The Girl Who Loved Mothra and Pentimento. Nominated for the Pushcart and Best of the Net, and featured on Poetry Daily, her poems have been awarded the Thomas Merton poetry prize and other prizes.

The Only Country was the Color of My Skin 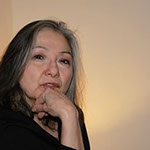