Don Mitchell is an ecological anthropologist, writer, and photographer who lived among the Nagovisi people of Bougainville for several years in the 1960s and 1970s, and returned in 2001 after Bougainville’s war of secession.

He grew up on the island of Hawai’i. He studied anthropology and creative writing at Stanford and earned a PhD in anthropology from Harvard. For many years he was a professor at Buffalo State College, as well as a marathon and ultra-marathon runner and a successful road race timer (Runtime Services). He continues to enjoy traveling long distances on foot. He lived in the city of Buffalo, later in Colden, NY, and, in 2013-2020, in Hilo, Hawai'i.

He published an academic book and articles about Nagovisi, but in the early 1990s returned to writing fiction and poetry. His stories of another culture have won praise from many quarters, including a Pushcart nomination and awards from the Society for Humanistic Anthropology, New Millennium Writings and other journals. You can also find his work on-line at The Nervous Breakdown.

He lives  near Ithaca, NY. He maintains a photographic website as well as one for A Red Woman Was Crying. 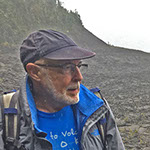 A Red Woman Was Crying