At the moment it's my favorite of all the covers I've made. This is a Japanese tansu, a chest typically in three or four parts, used for clothing. This one (which I inherited) also has a compartment for hanging clothing.

I had enough room to back off and use a normal lens, but in the same way I used a superwide for Supposed to Love and The Staked Plains, I moved in close so that I could get the door not just to open out towards the camera, but to angle up and down, opening out towards the right side. Also, that gave me lots of floor.

I lit it so that the upper part, particularly the upper left, would be become indistinct, even foggy. The clothing (Japanese, American) also takes the eye up to the angle between the title and Kathleen's name. And I was able to "blow out" the wall, which is actually vertical boards.

This chest is about 2' from where I sit in my workroom. It's my equipment cabinet.

The Only Country was the Color of My Skin 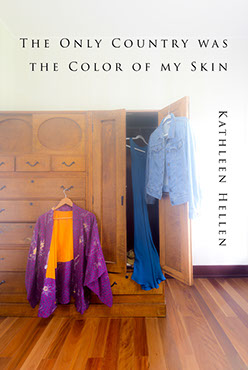