This was another difficult one, because the essays were very diverse, and "shipwreck" only metaphorical. I felt strongly that something to do with the ocean was required. But what? I had a shot of a lonely shore that I liked, but it didn't work. I did a couple of trial with old prints of wrecked sailing vessels I had (from Wiscassett ME, taken back in the sixties), photographing the prints themselves, strewn carelessly on the ground, but that didn't work either.

I went to the shore and tried a few things along the lines of "shoe abandoned on steps leading to lashing waves" but that, too, was a failure.

Then I remember that a kind of tree called "False Kamani" that grows along the shore was in its red-leafed phase. So I went down and spent a couple of hours (really!) shooting false kamani leaves in Hilo Bay.  A shipwrecked leaf? Um, not exactly. But sort of.

I knew the shot would never work as an overall, so it became an insert.

A Talent for Shipwrecks 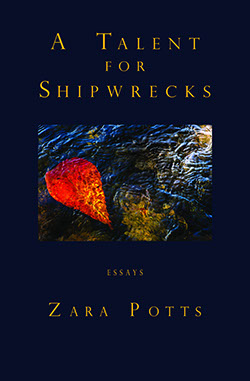