Carol Houlihan Flynn has published a mystery novel, Washed in the Blood, (Putnam 1983) and - in her other life as an English professor - several academic works, including The Body in Swift and Defoe (Cambridge 2005), and Samuel Richardson, a Man of Letters (Princeton 1982).

She was for many years Professor of English at Tufts University, in Massachusetts.

Raised in Chicago, she now lives in Boston.

Carol's blog is at www.the-animals.net 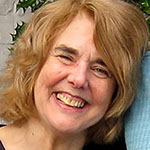