Caiden Feldmiller grew up in Erie County, Pennsylvania, and now lives in Pittsburgh with his wife, Julia Warren. He studied with poet Frank X. Gaspar at the 2011 Chautauqua Writers’ Festival, and in 2012 received a summer fellowship to study in Oxford, England.

Feldmiller graduated with highest honors from Edinboro University in 2013 and now teaches ESL courses for the Greater Pittsburgh Literacy Council as a Compass AmeriCorps member. The undergraduate journal Chimera recognized his poem “Sunday Morning Father” with its Samuel Hazo Award in 2011.

You can find Caid on Facebook and on Tumblr 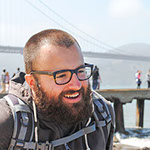