In Japanese culture, shibai means "drama," or "play," but in Hawaiian slang it means "smokescreen," "bullshit," "gaslighting." In this uncategorizable work, Don Mitchell weaves together the brutal 1969 murder of his friend, Harvard graduate student Jane Britton, with harassment by law enforcement and the media, the language and culture of the Nagovisi people of Bougainville, the Big Island of Hawai'i and the high barrens of its dormant volcano Mauna Kea, ultra running and walking, and the New York milieus of Buffalo and Ithaca. The unforgettable Jane Britton threads through the book, along with one of the suspects, the State Police detective who eventually solved the case, and Becky Cooper, an investigative journalist in whose book about Jane's murder Mitchell is a continuing presence. Addressing himself in the second person, Mitchell creates a fascinating meld of fiction and nonfiction, past and present, speculation and discovery that excavates layers of truth, of error . . . and of shibai.

On one level, Shibai recounts Mitchell’s compelling and brutally honest odyssey in dealing with this traumatic event for half a century until the murder was finally solved in November 2018. But on a deeper level Mitchell forces the reader to grapple with the passage of time, the nature of truth, indeed with life and death itself. And he takes us on a captivating cross cultural journey, moving from the remote Pacific island of Bougainville to the dramatic Mauna Kea volcano on Hawaii’s Big Island to the bowels of the Cambridge police station. Mitchell’s life took turns he never expected and he weaves a fascinating tale in seeking to make sense of it all.”  -- Michael Widmer 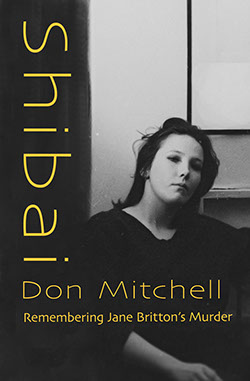